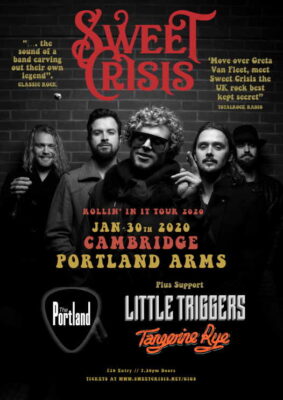 Sweet Crisis is a contemporary Blues rock band in which the roots and the music run deep. Singer Leo Robarts and guitarist Piers Mortimer first met in Cambridge when they were kids in the early 2000s, and as Leo says, “This band is all about soulful, rock n’ roll.”.

2019: 4 Singles. 4 Tracks of the Week awarded from Classic Rock Magazine. Explosive festival appearances and countless column inches and radio play. 2020: A run of dates in Switzerland followed by an extensive UK tour (including Cambridge Portland Arms on the 30th January) Single 5 ”Rollin’ In It’  set for release in late February. Summer festivals and then the long-awaited release of their debut album.

“Like rock and soul? Cambridge’s Sweet Crisis have both of them by the caseload, as shown in this organ-swirling, 70s classic rock-evoking new track (think Free, early Fleetwood Mac and Humble Pie having a pleasantly mellow knees-up and you’re on the right track). Summer encapsulated in just under four minutes”