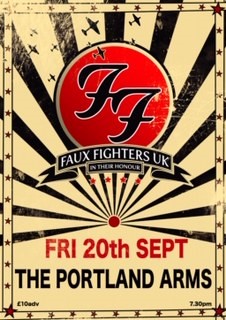 Faux Fighters Uk started when a bored Ben Rudge, drummer turned frontman, decided to start a one-man recording project taking the role of every band member and recording “best of you” on his own. Utterly impressed with his new found skills, he sent the demo out to his long term buddy Bassist, Liam Slattery whose only reply was “You multi instrumental talented F*&ker”

First to jump on board with this crazy Idea was Guitarist Russ Millard closely followed by Paul Beddow. I mean if your gonna go Foo you gotta have 3 guitars right?!?!

Next came the hard part, finding a drummer that would power this along & also put up with having a drummer as a front man.In steps Kris Perrin or as we like to call him “Meat Fists”. The line up was complete! Or so we thought!! After one show we decided that we’re gonna need some keys! Welcome to the fray Mr Ben Selleck, I mean the foos can’t be without Rami & neither can the Faux’s!

Fast forward 2 years and here we are, 75 foos songs in the bag & ready to make some noise!