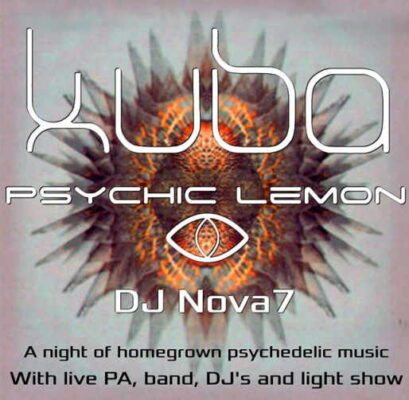 KUBA
Kuba is the artist name used by Cambridge based producer Laurence Harvey, for his explorations into a wide range of genres including dub/electronica/world music/reggae/ambient and psychedelic to name but a few. Laurence uses a combination of analogue synths, software and plays a wide range of acoustic instruments, all blended using 21st century studio techniques.

Laurence began releasing music as Kuba in 2006 when Youth (producer of Pink Floyd, The Verve, Crowded House and bassist of Killing Joke) first heard his solo project and produced the debut Kuba album ‘Inside Out’ which was released in 2006 on Liquid Sound Design Records. Laurence has released a further six albums, numerous singles and EP’s, and has completed mixes for many well known bands including Shpongle, Banco De Gaia, Tripswitch, Suns Of Arqa and Entheogenic to name a few. Kuba tracks have featured on albums alongside respected artists Major Lazer, Nitin Sawhney, Jay Z, Panjabi MC, Anoushka Shankar, Ott, Missy Eliot, Talvin Singh, Nusrat Fateh Ali Khan, The Orb and many more.

​The sixth full length Kuba album ‘Animalia’ was released on the 20th April 2018 on Liquid Sound Design Records. The new album was written and recorded in Youth’s space mountain studio in Spain. Whilst working in the studio Laurence also mixed and engineered live studio sessions for Shpongle, Suns of Arqa, Nick Turner (Hawkwind) and worked alongside John Leckie (producer of Pink Floyd ‘Meddle’ and ‘Wish You Were Here’). Laurence has also collaborated with The Orb, Gaudi and Jah Wobble (Public Image) playing Bass on ‘The Lighthouse Family’ and Hollie Cooks new album ‘Vessel Of Love’. Having spent the most part of the last two years in the studio, Laurence is back on the road with his live show; performing material from Animalia, unreleased tracks and collaborations he has been working on over the last two years.

PSYCHIC LEMON
Local Cambridge band, Psychic Lemon, describe their sound as a blend of psych, space rock and a number of other genres. They have been described as Pioneers for the new wave of modern krautrock.
The band used to rehearse and record in a studio in the back of a small garden in Cambridge, but got evicted and now lead a nomadic existence. The band’s influences are broad, but choice artists include Hawkwind, Goat and Amon Düül II.
They have released 3 albums, the latest, ‘Live at The Smokehouse’ earlier this year.
https://www.facebook.com/psychiclemon/