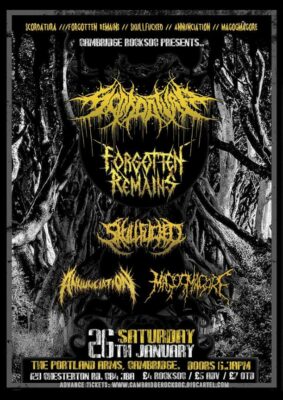 SCORDATURA (Death Metal – Scotland)
Glasgow legends Scordatura hit Cambridge for the very first time! Known as one of the biggest bands in the British underground death metal scene, they have released their second album ‘Self Created Abyss’ last year and supported Cryptopsy, Aborted, Blood Red Throne and Nile amongst others. Utterly brutal and heavy, guaranteed to pound your skull to dust!

FORGOTTEN REMAINS (Thrash/Death Metal)
Bringing their style of Scandinavian death metal merged with old school trash, Forgotten Remains also hit Cambridge for the first time! For those that like it fast trash with a harder edge!

SKULLFUCKED (Death/Grind)
Probably the best (or worst) thing to ever come out of Stevenage, Skullfucked are back in Cambridge for round 2! 100% Brutal deathgrind!