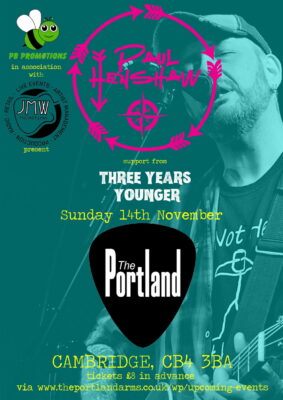 Thumping lumps out of his guitar and singing passionately about life and his own experiences, Paul Henshaw is one of the RIOT FOLK family’s hardest workers, touring relentlessly across the UK, Europe and afar.

In 2014 he went back to the studio with anger and attitude to produce his first full band studio album titled; ‘I Refuse to Sink’. Then in 2016, Henshaw and friends, now known as Paul Henshaw and the Scientific Simpletons, went into the studio to produce ‘You Just Lost the Game’, this album was quickly followed in May 2017 by the third studio album for the band ‘Fishing for Owls’.

Fishing for Owls reached #1 in the Amazon album download charts with the singles ‘Stones’ and Fay’s Song’ reaching #1 and #3 respectively.

In October 2018 came the release of the third solo studio outing for Henshaw with the strangely titled ‘56A’, which includes the much talked about lead song ‘What if’ and is by far the most complex and heartfelt work Henshaw has produced to date.

Nov 1st 2019 saw Henshaw and the band release their brand new 14 song album, with a 6 week UK and European tour the year was a huge success

Three Years Younger is an indie-pop duo from Suffolk, made up of sisters Megan and Charlotte Simpson. They love to sing in close harmonies, which have been described as “angelic” and “spine-tingling”. In 2019 they won the Under 18s Cambridge Band Competition and Kimberley Rew Award and were excited to perform at Camp Bestival and the Big Weekend in Cambridge.