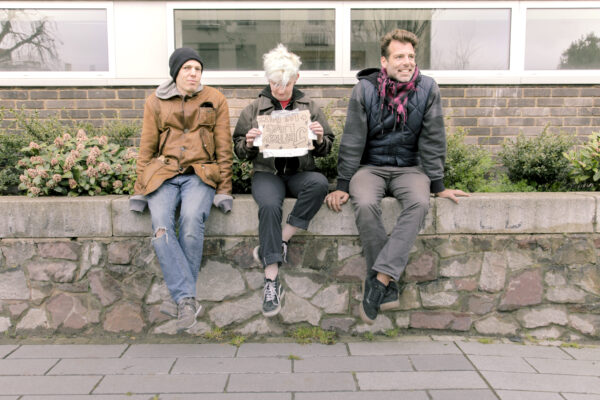 It’s very exciting to be able to tell you that Jeffrey Lewis & The Voltage will be making a return visit… Lewis is one of our all-time favorite songwriters and performers and previous shows have always been such an evening of sheer joy.

Its hard to know where to begin when describing New York born and based Jeffrey Lewis’s creative activities. As a musician and songwriter he has been active for such a long time, both solo and with an array of bands, performing and recording with The Voltage – formerly Los Bolts – since 2015. In addition to this Jeffrey Lewis both writes and illustrates graphic novels, having published his comic book, Fuff, since 2004 and incorporates artwork and storytelling into his live sets to magical effect.

In addition to writing, performing and recording under his own name, Jeffrey Lewis also collaborates with Peter Stampfel of 60s legends The Holy Modal Rounders and they released their second album, “Hey, Hey its The Jeffrey Lewis and Peter Stampfel Band,” in 2013. A third Stampfel/Lewis album and a new album with The Voltage are both in the pipeline.

Jeffrey Lewis has attracted a great deal of praise from contemporaries such as Jarvis Cocker (Pulp), Dave Berman (Silver Jews), Paul Banks (Interpol) and Will Oldham. The latter said of Lewis, “Really great and impressive and inspiring and exciting… There’s not a lot of people that can tell a story and use language like that in music.”

The Jeffrey Lewis & Los Bolts 2015 album, Manhattan, is a work of utter genius, an original take on life in the Big Apple by that rare individual, a genuine artist still living in the city despite increasing gentrification and is a lyrical, beautiful and sublime record.