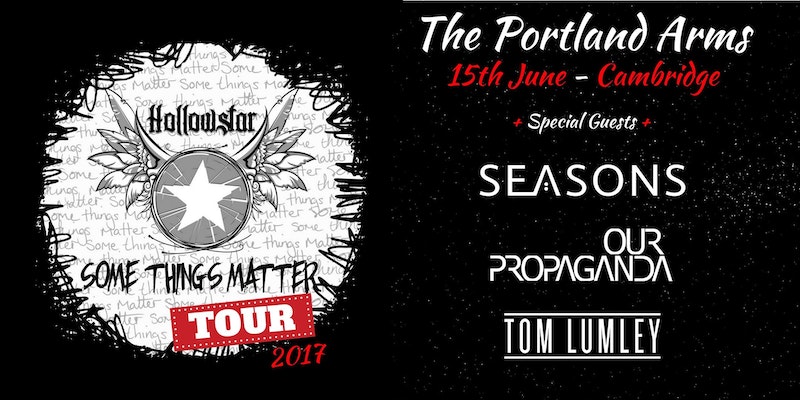 HOLLOWSTAR ‘SOME THINGS MATTER TOUR’
Hot off the back of releasing their debut EP ‘Some Things Matter’ Hollowstar are coming to Cambridge for their hometown show! This is the second date of their nation wide tour and they are at The Portland Arms to share it with you!

The past year has seen the lads go from strength to strength playing extensively around the country at prestigious venues and festivals alike. The band return to their hometown with some very special guests for what is sure to be a huge night of the tour.
On the night they will be joined by Seasons, Our Propaganda & Tom Lumley (more info below). Doors open at 7pm and will run until 11pm. Tickets are £6.

THE BANDS
HOLLOWSTAR
With riffs fit to grace arenas one day, and with a rapidly growing reputation for being a hugely entertaining live act, this is a band you must see live to truly appreciate. Hailing from Cambridgeshire, Hollowstar are a band on a mission; To make some of the finest rock and roll ever heard on this side of the Atlantic.
SEASONS
Launching in March 2016 with their debut, self-titled EP, the band already has some big names under their belt including the likes of Kerrang! magazine who awarded their debut EP a massive 4 out of 5 K’s, as well as being on the radar of the likes of Rocksound magazine. Spot plays on Kerrang! radio and endless support from BBC Introducing coupled with playlisting on Scuzz TV has elevated SEASONS to incredible heights already.

OUR PROPAGANDA
Hailing from the breakwater towns of South East England, Our Propaganda is Jack Denton, Charlie Denton, Joe Newman and Harvey Groom. A rock band through and through but with more to offer than just drinking songs and fake stories of 70s style extravagance. “Sometimes music comes out of nowhere and you wonder why the artist isn’t better known. Our Propaganda are a case in point… confident and bold with a cool rock sensibility, these guys have a great future!” Alan Dorey (Forest FM).

TOM LUMLEY
An Indie singer/songwriter originally from Cambridgeshire. He has been writing and gigging for the past three years with his band behind him. During this time he has played at popular venues in the UK supporting the likes of The Hunna, Coasts, The Sherlocks, Kill It Kid and playing festivals such as Dot To Dot, Green Meadows (BBC Introducing) etc. Whilst constantly being busy out on the road Tom has also spent a lot to of time in the studio releasing his music of which his debut EP ‘Dream City’ charted at No.2 in the UK iTunes Rock Chart and No.46 in the UK iTunes Album Chart.