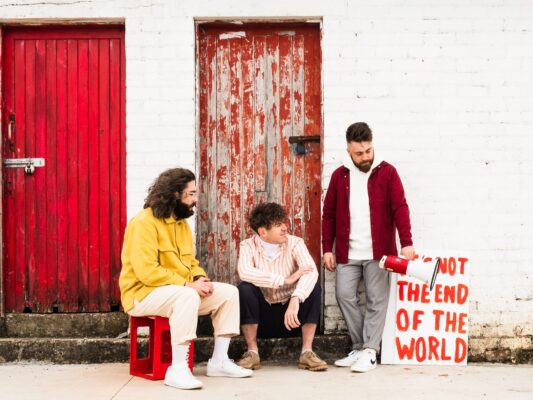 *This is a rescheduled show from the 25th March. Tickets already purchased for that date are valid for this one*

Normal Fears, Fatherson’s fourth album, is a lush lesson in letting go. Gorgeous, groove-led singalongs steeped in electronics find the band in a playful mode, putting break-ups, old ways of working and everyday worries behind them to start afresh, sunny side up.

Normal Fears was largely written remotely, taking flight with the first lockdown. Stuck at home, Fatherson embraced the new normal and the fresh possibilities it posed. When lockdown lifted in early summer, the band decamped to RAK studios in London with producer Steph Marziano (Hayley Williams, Denai Moore, Mumford & Sons) and engineer Isabelle Gracefield (Dua Lipa, Stormzy), where “Normal Fears” took yet another twist. Rather than record everything live, as Fatherson previously had, songs were torn apart and reassembled, pianos fed through cassette players and ping pong balls introduced.

“It was the most fun we’ve ever had making an album and I hope you can hear it,” says the band’s frontman Ross Leighton. “It’s also a lesson to ourselves. We’re best friends in a band. Life is more than alright.”

Renowned for their encapsulating live performances, they have toured alongside the likes of Lewis Capaldi on his EU arena dates and at Wembley Arena, as well as playing with Frightened Rabbit, Biffy Clyro, Idlewild, Augustines, Enter Shikari, Amber Run, Twin Atlantic, and more.

Share via
Green Mind presents: FATHERSON
http://theportlandarms.co.uk/wp/event/fatherson-2/
Send this to a friend
Hi, Seen this on The Portland Arms site and thought it might be of interest!
Green Mind presents: FATHERSON!
This is the link: http://theportlandarms.co.uk/wp/event/fatherson-2/