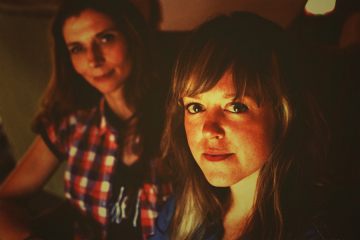 After announcing a break from touring with her longtime backing band The Red Clay Halo, Emily is now busy writing songs for her next solo album. Alongside some old favourites, she will showcase some of her new songs here for the first time, accompanied by Gill Sandell.

Emily has composed music for two films that see their release in 2015: The Keeping Room (Sam Worthington, Britt Marling, which premiered at the BFI London Film Festival) and Hec McAdam (her first full feature length soundtrack – the film stars Peter Mullan and Keith Allen, to be released later in 2015).
Emily released three albums with The Red Clay Halo (Despite The Snow, Almanac and Dear River). Her first solo album Photos.Fires.Fables. has just been re-issued in new packaging with three bonus tracks.
“heartfelt songwriting” The Times
“Emily Barker has a gift for great melodies” Guardian
“Barker’s voice can’t fail to grab people’s attention” The Word Magazine

With support from Paul Goodwin:
Paul Goodwin grew up in London but lives in Cambridge now. He’s spent the last 10 years or so dragging his guitar around the rail network and on the odd plane, playing his quietly heartbreaking songs anywhere that would have him, to anyone who would listen, and quite a few people that wouldn’t. His music has taken him all over the UK as well as to Canada, France and America and he’s played alongside acts ranging from Alessi’s Ark to Waterson:Carthy to Wayne Hussey. His painstakingly produced first album, Scars came out in 2009 and the follow up mini-album Trinkets and Offcuts is released in summer 2011. He also made several EPs and had an acoustic CD on pioneering internet record label Burning Shed.