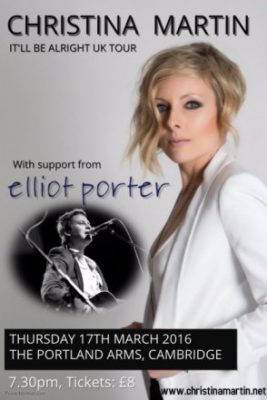 Block Porter cordially invites you to this very special event in Cambridge.

We are very pleased to be putting on award winning Candian songstress Christina Martin for the Cambridge stop on her 2016 UK Tour. Christina is an artist of great pedigree and this is a rare chance to see her on UK shores.

Born in Florida and raised in Canada’s Maritimes, Martin’s musical journey since her first release in 2002 has led to extended stays in Austin, Texas, as well as Germany, from where she has cultivated a substantial following across mainland Europe. Along the way, she has earned multiple East Coast, and Music Nova Scotia Award nominations, had songs placed in television programs, and even performed for Queen Elizabeth II in Ottawa.

It’s all set the stage for ‘It’ll Be Alright,’ and an ambitious live show that will take Martin and her band around the world throughout 2016. “I’ve wanted to develop the live production for a long time” she says, “with an aim to create special events that build a strong connection between the audience and the music. We also want to represent this album live as accurately as possible, and that means having an incredible band and team involved. I’m stepping out of my comfort zone in doing all of this, but that’s the exhilarating part of it.”

“It’ll Be Alright will find a home with fans of Fleetwood Mac, Melissa Etheridge and The Hold Steady…With tales of love lost, anxiety and small town desperation running throughout, this is storytelling at its finest. “ Rob Evans, Powerplay Magazine UK

Elliot is based around Cambridge and has built up a strong live reputation over the past 2 years. Twice nominated for Best Male Solo Artist at the NMG Awards, he has recently released his latest EP Keep Going to glowing reviews.

After appearing on BBC Introducing Cambridge in January, Elliot was then played by Bob Harris on BBC Radio 2.

2016 looks set to be a breakthrough year for Elliot and this will be his first Cambridge appearance for quite a while.

London FM – “Elliot Porter’s music is beautiful with lovely Lennon and Damien Rice-esque melodies that stay with you and touch the soul”.