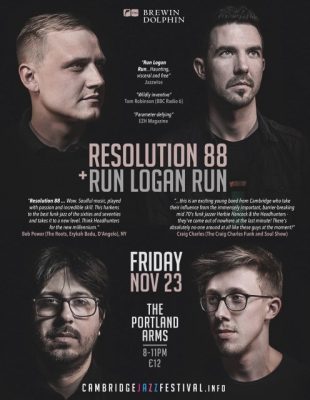 “Wow. Soulful music, played with passion and incredible skill. This harkens to the best funk-jazz of the sixties and seventies and takes it to a new level. Think Headhunters for the new millennium.” Bob Power (The Roots, Erykah Badu, D’Angelo), NY

“Resolution 88 … this is an exciting young band from Cambridge who take their influence from the immensely important, barrier-breaking mid 70’s funk jazzer Herbie Hancock & the Headhunters – they’ve come out of nowhere at the last minute! There’s absolutely no-one around at all like these guys at the moment!” Craig Charles (The Craig Charles Funk and Soul Show)

“Resolution 88 have gone with the … influence of mid-70’s Herbie Hancock and the Headhunters and do it in the most heavyweight, sincere and unique way.” Snowboy (Blues & Soul Magazine)

Resolution 88 was started in 2012 as an original funk jazz project. Tom O’Grady, the keyboard player and MD, was inspired by Herbie Hancock & the Headhunters and more recent ground-breaking artists such as Kaidi Tatham. Resolution 88’s music is based around the sound of the Fender Rhodes piano, complex changes and heavily syncopated funk / broken beats.

Run Logan Run are a head on collision of pounding tribal drums and screaming guttural saxophone. Architects of intense contrast the duo’s diverse and precise instrumentation regularly flirts with fragility and raw power.
Formed through a shared passion for improvisation, spiritual jazz and heavier experimental music, they are Andrew Neil Hayes (Saxophones / FX) and Dan Johnson (Drum Kit / Percussion), and have been authoring their own narrative in the new wave of crossover jazz, whilst touring the UK extensively, sharing stages with the likes of Colin Stetson, Melt Yourself Down, Shabaka Hutchings, Sarathy Korwar and Hieroglyphic Being.
Their debut album was recorded live at Stoke Newington’s Total Refreshment Centre, which has been, and continues to be, a prominent platform for promoting, recording and releasing some of the best new talent from the British underground. It was produced by Danalogue & Betamax (The Comet Is Coming) instilling further idiosyncratic dynamics into Run Logan Run’s already distinctive sound.