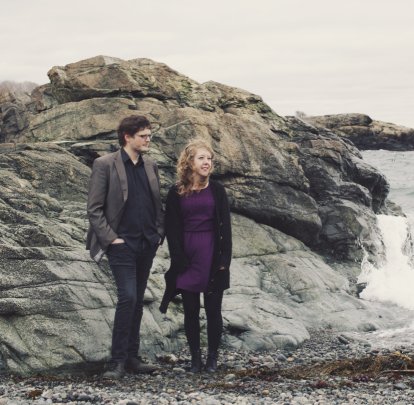 *THIS GIG HAS BEEN CANCELLED. APOLOGIES FOR ANY INCONVENIENCE*

Alex Cumming (The Teacups) & Nicola Beazley (Speldosa) are an award winning, exciting Box & Fiddle duo performing both songs and tunes from around England. They are both graduates of the Newcastle Folk and Traditional Music Degree and are New Roots Finalist 2014. 2016 has seen Alex and Nicola perform at some of the top UK festivals in England, such as Broadstairs and Sidmouth Folk Week, and embark on a tour of both America and Canada. Their much anticipated debut album ‘Across The Water’ will be released in the autumn 2016 on Haystack Records, following a highly successful pre-launch tour for which the album has been very well received.

“No nonsense English folk music at its very, very best”
“Two musicians right at the very top of their game”
(Downend Folk Club 2016)