This event has been postponed. New date to be announced. 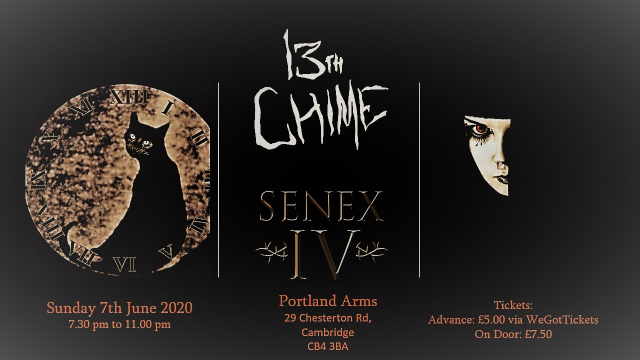 A night of vintage Gothic and Dark rock. 13th Chime were early gothic pioneers from the early 1980’s. In recent years, the band have taken their unique sound around the world. 13th Chime will be supported by a SENEX IV a new band featuring members from a variety of underground bands.

In 2007, Sacred Bones Records based in New York re-released these singles and other unreleased recorded material to a new and global audience.

In 1984, Rob Shaul joined to play keyboards and when Mick Hand left to travel the world, Dave Middle replaced him on vocals. This format ended in 1984.

In 2015, Mick Hand reformed the group bringing back Rob Shawl on guitar and Dave Middle on drums. The band was completed by adding Jon Rickard from early 80’s Gothic band Final Scream.

SENEX IV were formed in 2019 by Dave Middle and Rob Shaul from the reformed 13th Chime. Dave Middle returns to the microphone for the first time since he was the singer for Final Scream and Vanishing Point in the 80’s. They are joined by Mark Tingey (bass) and Antony Hitchcock (drums). The band have released two singles – My Sister is a Serial Killer and Trouble. Their debut album called Dolls House is due out Feb 2020.